Pizzolato in Villorba: the winery of the future has km 0 and organic roots

Home » Blog Posts » Pizzolato in Villorba: the winery of the future has km 0 and organic roots

Pizzolato in Villorba: the winery of the future has km0 and organic roots

From history and tradition comes the new vision of Settimo Pizzolato’s wine. New offices will be added to the symbol of the company, an historic villa of the 1500s, and will visually tell the philosophy that gives life to all the wines of this reality made in Treviso

VILLORBA. Five generations of history and tradition, a long commitment to wine production with consideration towards nature and the highest quality, a company that creates its idea of the future step by step. These are the strong roots of Pizzolato family, upon which a whole philosophy was built. A path that begins thirty-five years ago, in 1981, when Settimo Pizzolato joined the company alongside his father Gino; he progressively undertook the organic way, among the first wine producers in Italy to do so. Thanks to his desire to maintain the balance of the countryside ecosystem and an organization of the winery which makes wine and respects the vineyards at the same time, in 1991 Settimo was able to obtain the official certification to produce organic wines. The result is a product that describes the territory where it was born and the search for a lifestyle in harmony with nature.

“It’s been thirty-five years since I joined my father at the helm of our farm – says the owner, Settimo Pizzolato – Since then, my desire was the conversion to organic production, to rediscover the ancestral link between man and earth. Thanks to my determination, I was able to realize this dream and to spread around the world an environmentally friendly wine. Today this long journey is crowned with the construction of a new winery, which perfectly represents the lifestyle that I pursue and of which my wines are ambassadors”. A radical choice that over time aims to involve every aspect of the production process: the use of green energy, half of which is self-produced thanks to a photovoltaic system on the roof of the winery; the reduction of waste through innovative and energy-efficient machinery; the automatic on-off switches for the light systems; the localized thermostats; the phyto-purification and reduction of water consumption in the vineyards through micro-irrigation. There are so many attentions that La Cantina Pizzolato has towards the ecosystem, showing how through some little gestures and cutting-edge systems it is possible to limit the energetic impact and to recycle water for other uses. A commitment that expresses a promise kept fully respecting environment and society.

Consolidated values, which will be a fundamental starting point for the new winery, which will be officially inaugurated on 29th May and will be a meeting point for the Treviso community: a place where passion, people and wines will meet and will share moments of leisure. The highly anticipated modern headquarters will enhance the importance given by the historic villa: a large building of the sixteenth century, in perfect Palladian style, represented in numerous maps of Villorba, even dating back to 1680. Pizzolato House, in Via IV Novembre, has always been a symbol of hospitality and family unity, and it is represented in the company’s emblem, telling the origin of a story that contributes to the growth of an entire society and strengthens its founding principles. A winery always moving forward, which will turn into a great place for sharing and for emotions, through evenings, events and activities for everyone: from wine enthusiasts, to the operators of this sector, to reach even the youngest ones. A desire to look to the future, therefore, with a spirit of solidarity: Settimo Pizzolato’s intention, in fact, leads also to less expensive finished products which are affordable for everyone, in order not to exclude anyone from the chance to enjoy a 100% natural product. In line with his philosophy, Settimo Pizzolato has chosen to use Km zero consultants, suppliers and, most importantly, local materials, even for the realization his new winery. 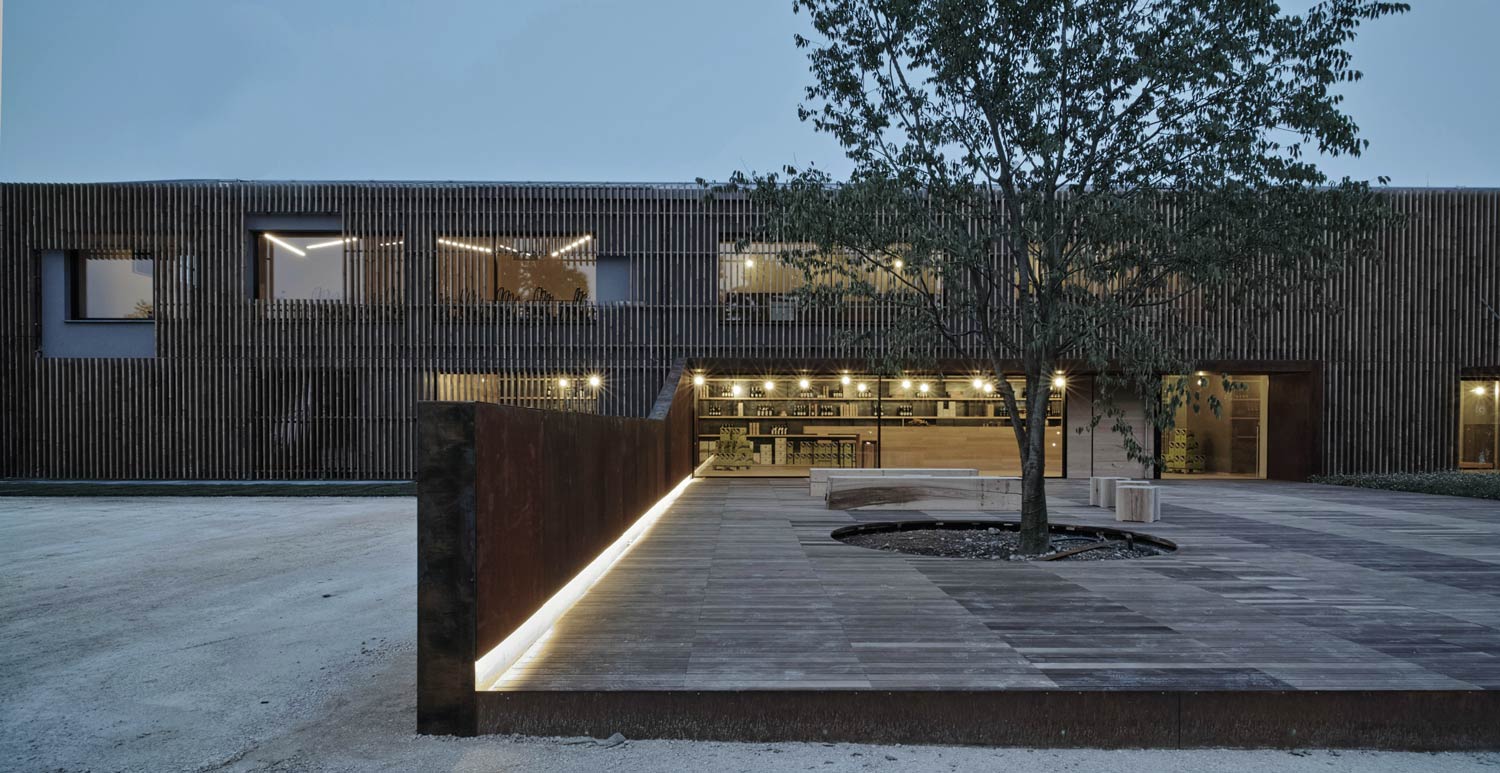 THE PROJECT: is signed by MADE associati, Adriano Marangon and Michela De Poli, architects in Treviso. The presence of the Villa, residence of the owner, is a predominant element in the composition. The area of the offices will be structured to be a representative image of the company and will have a direct relationship with nature, through a reception area, a wine shop and a laboratory on the ground floor. A suspended walkway will also be the link between the different spatial levels of the building and all stages of production, in an ideal continuity, not only visual, which is the route that leads from the vineyard to the glass. The building will have a “skin” that consists of a filter coating of vertically placed wooden planks, whose oxidation will contribute, over time, to the integration of the structure into the landscape, inspired to the traditional rural buildings of Treviso countryside. The winery will also have many points of contact with the outside world: some grass surfaces will be the transition between the parking area and the building, while a wooden square will give continuity to the inside. The paved outdoor space will be used during events related to the activities of the company. 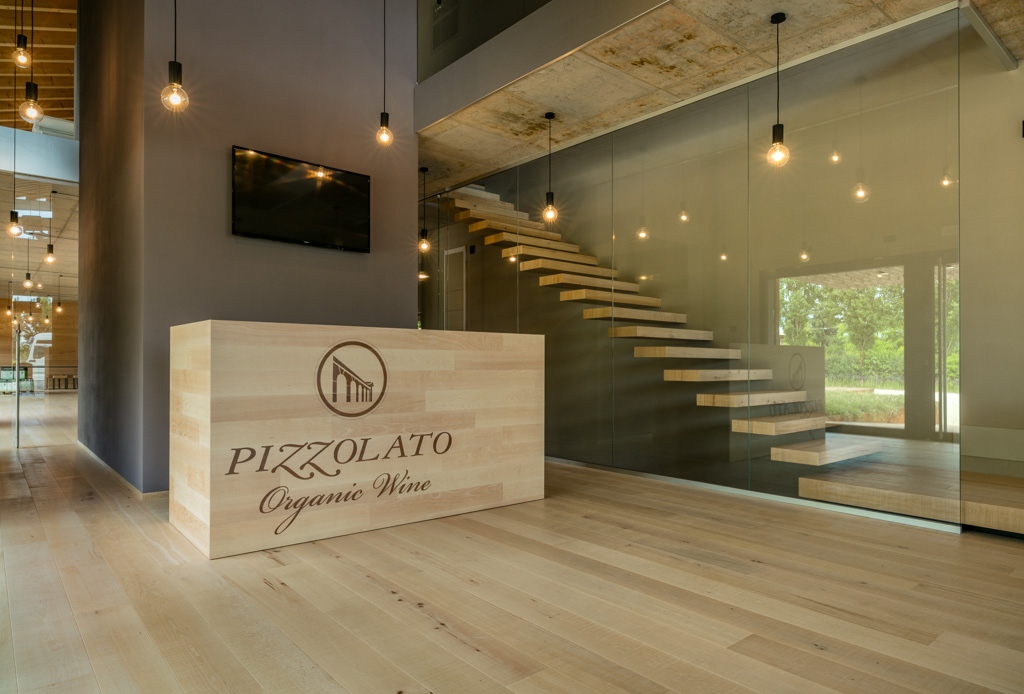 MATERIALS: the wood used in the whole project is beech produced by ITLAS, another great business reality of the Treviso area. The wood is PEFC certified Beech from the Cansiglio controlled Forest chosen through a selection process carried out in agreement with Veneto Agricoltura. A zero kilometer product, since the Cansiglio Forest is located only twenty-five kilometers from the Itlas production site; the beech wood of the Cansiglio Forest has outstanding technical characteristics of strength and endurance, and is in fact used since the Serenissima Republic of San Marco time. A complex and sophisticated project, which will create a very contemporary structure thanks to its linearity, reflecting the present and the future of La Cantina Pizzolato. The winery will merge with the surrounding area, in a continuous dialogue between knowledge, respect and well-being which are the principles of the organic lifestyle.