Palazzo Giacomelli was the starting point of the “Eco Rete Sostenibile” Tour: an exhibition promoting circular economy projects that was born thanks to the networking of many companies, which are part of the “Gruppo Sostenibilità” by Assindustria Veneto Centro

At Palazzo Giacomelli the eco-project hosts,  from the 5th of June to the 10th of June, an original exhibition showing the projects realized by 15 Treviso-based companies using re-cycled materials.

With a timing-anticipating intuition, the  Eco-Rete Sostenibile project by Ricrearti helps sustainability-caring companies to network together, proposing to re-use waste materials in order to give them a new life and turning them into artistic, artisan or functional objects. Following the 2030 Agenda for the Sustainable Development, a new concept of high-quality produced – or wasted – objects is introduced, because what to a company might be a waste product, to another it could represent a raw material able to create revenue by producing new objects. But of course, the starting point needs to be the company itself, knowing that in order to become green it needs to invest on itself.

The Eco-Rete allows to save internal resources, optimizing materials and creating a transversal synergy between entrepreneurs, promoting the “enterprise culture”. The potentialities of this system allow to never create the same objects, giving the chance to have exlusive lines even to those operating in the same field.

The innovative approach of Ricrearti can be noticed in the many original prototypes that were created, respecting 9 points out of 17 of the Agenda 2030. 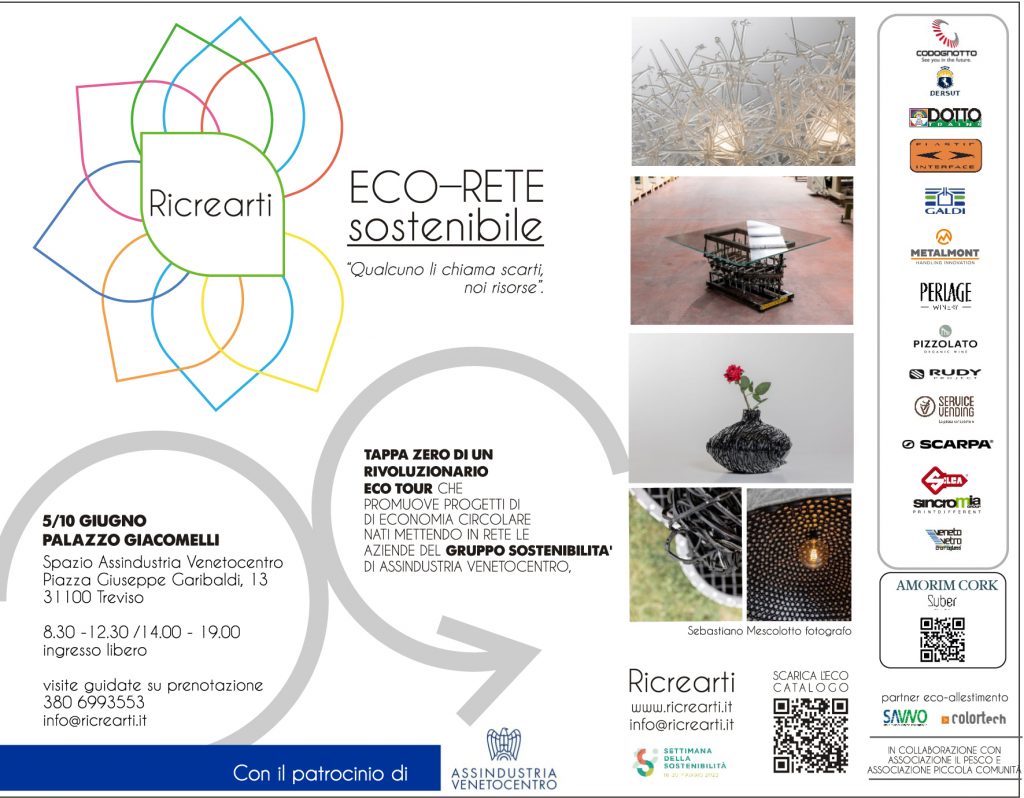 Included in the exhibition there are also the works part of the Suber line by ETICO, a project by Amorim Cork Italia that collects mushroom corks and US preseting the the M-USE bottle, designed to be re-used and re-cycled into something new, like a lamp or a storage compartment.

In order to realize the prototyoes, Ricrearti involved the Association Il Pesco of Mogliano Veneto and La Piccola Comunità of Conegliano, two organization that welcome disadvantaged people. These innovative and original objects could be assembly produced in the future, starting a virtuous chain of creative re-use.

Already presented during the latest Sustainability Week by Assindustria Venetocentro at Sant’Artemio, the headquarter of  Treviso Province, the exhibition, after Palazzo Giacomelli, will stop at Veneto Vetro in Montebelluna, at the Caffè Dersut Museum, the office of the Assindustria Ventocentro Assembly and in 2023, in many other companies taking part to the project, among which our winery.